Welcome to the COMPANY GAVIN ROBERTSON website. Use the buttons at the left to navigate your way around, and contact us if you need any information, using the contact form.

Performances in 2022 still booking ... After Covid it's taking longer than usual to both book and confirm dates.

Confirmed dates are below - 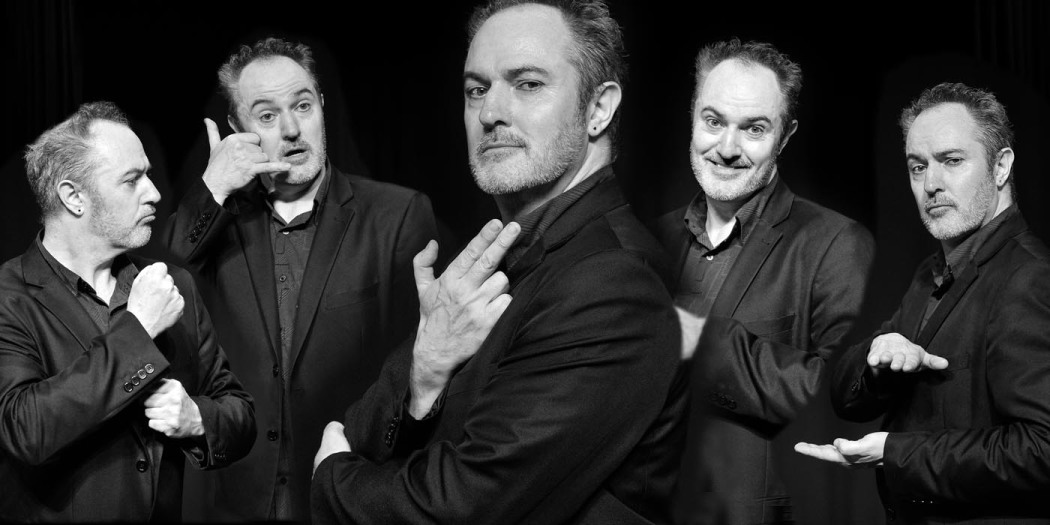 Here are a few extracts from reviews both in the UK and abroad.

“Using his signature style of precise, never over-fussy, and always clever physicality, Robertson, is Bond, Bond-girl, arch enemy and a fair few other characters as a classic Fleming story unfolds.

Parody lies at the heart of this hour and Bond Fans will delight in the many homages to the movies. That's part of the cleverness of the piece - we have parody, but also tribute. It is a testament to Robertson's ability as a performer as well as a creator of solo theatre that he immerses us so quickly and thoroughly in the feel and facts of a Bond film we've never seen, yet all recognise immediately.

Interest never dips for a second. The time flies by as the audience laugh in recognition at their favourite Bond moments, given neat and unexpected twists by Gavin Robertson.

Staging is simple and Robertson makes excellent use of hardly any props, manufacturing most out of his own hands and other limbs. He is a performer from head to toe, and nothing is an accident. Pure skill”.

“There is real pleasure in seeing Robertson use his low-key physicality to tell a high-gloss story. A shimmer of his hands cuts from one scene to another, or suggests the soft-porn sensuality of a title sequence. One moment he’s a faintly Roger Moore-like Bond, the next he’s a slimy foreign hitman, the next he’s lathering up in a shower as the gorgeous Honeydew Melons. Without any lighting changes or sound effects or catchphrases, his gestures are precise enough that we always know who’s who.

Robertson knows which clichés to capture. He nails the films’ fragmented structures, too, as he sends our man from London to Hollywood to the Caribbean to outer space. And when his time-travelling plot calls for it, he dishes out a decent Sean Connery impression too. Robertson’s physicality ensures that Bond ! is good fun for the fond”.

“The name’s Robertson…Gavin Robertson and this versatile and energetic performer slips on the mantle of Britain’s finest spy, as he embarks on his latest mission with a licence to make you laugh along the way.

Yet when I was first investigating the prospect of going to see “Bond” I wasn’t exactly sure what was going to be presented to the audience. I had the half-expected notion that it would turn out to be a rather lamely written effort, with a rather desperate actor prowling the stage with a water pistol, and then offering up some very dodgy impersonations of Sean Connery & Roger Moore! Although during the course of the plot, the raw distinctive vocal tones of the esteemed Sir Sean does eventually make a brief cameo appearance, this production is a most original and highly enjoyable experience that leaves you “shaken & stirred”(oops!) with entertaining amusement.

I must admit that this is the first time I have ever encountered the talented Mr Robertson and his “theatre of the imagination”, but I departed the show greatly impressed”.

“This is English comedy at its best, clever, subtle, intelligent, but combined with great theatrical skills so that the comedy is not just on the surface but resonates in numerous ways, far beyond the Bond films. I did say that this was clever, as well as extremely funny. Those who catch on to the references and make the connections will simply realise just how clever Robertson's script really is, and add a knowing nod of approval to their laughter”.

“Each step is perfectly timed, each change of direction fluid and purposeful. In fact, his physicality is what this entire show is about, with a large proportion of it involving no dialogue at all. It’s a joy to watch him morph from character to character, to embody the blank stage space and make it seem full with just the aid of three skeleton doorways.

There are specific shout-outs to certain Bond books and films throughout, which may tickle the fancy of aficionados, but the majority of the references are broader, encapsulating the overall attitude of the series – its recurring themes and well known devices – and ensuring that the show is accessible to all who have even the vaguest exposure to the series.

As a take on the Bond franchise, this is a thoroughly enjoyable night out, and as an example of physicality, it’s an impressive offering”.

This review of BOND from the shows in Kansas City, USA

"The James Bond mystique has been parodied so often and in so many different ways — even by the movie franchise during particularly dreary spates — that you’d think there’s nothing left to spoof.

Actor/writer Gavin Robertson proves that creative performers can still come up with fresh takes on the most familiar material in his one-man show called, simply, “Bond!” It’s a consistently funny romp through Bondlandia. This show, which is part of the annual British Invasion produced by Central Standard Theatre, stands in sharp contrast to “Crusoe,” that show he brought to the 2012 invasion. That piece, although sharply comic at times, was a philosophical reflection on our place in the universe. This show is strictly for laughs.

And laughs are what Robertson delivers as he dives into the 007 imagery. Robertson, performing in a black suit over a black shirt, is such a skilled physical performer that he can paint images in the viewer’s mind and has no problem playing two characters in one scene. His only props are three rectangular metal frames that he employs inventively in various ways, and two miniature cars.

He opens the show with his own version of elaborate movie credits we’ve come to expect from the Bond films and then launches into a delightfully convoluted story about the title character being brought out of retirement to prevent a madman from detonating a small nuclear device in Los Angeles on the night of the Academy Awards. There’s a scene at a casino gaming table, a car chase and some business involving a time machine in which novelist Ian Fleming travels back in time in an effort to erase his famous creation from existence.

The most clever aspect of Robertson’s show is that he never identifies himself as James Bond — his version of the character’s signature line is, “The name is Bond … just Bond.” We recognize M and Q and Moneypenny, but they are never identified by name. Robertson himself described the show as “fluff” in a post-performance conversation, but his artistry is so impressive that he keeps you constantly engaged. His performance also stimulates the viewers’ imaginations, which is always welcome during a night at the theater." 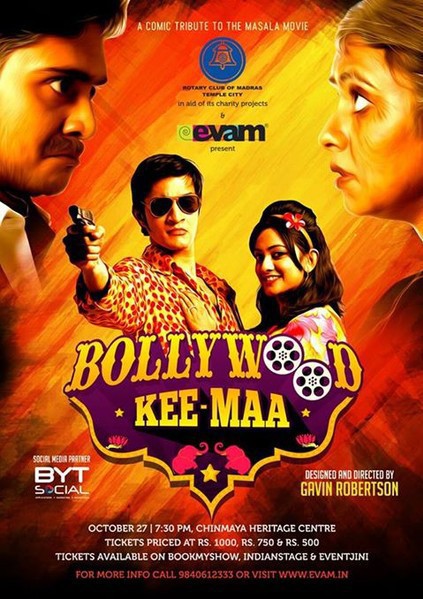 In July 2013, Gavin returned from a 6-week trip to Bangalore, India where he created and directed a comic 'Bollywood onstage' parody, 'Bollywood Kee-Maa'. Evam, who toured 'The 39 Steps' from London's West End, produced ths new show for performances in August 2013, and touring later in the year... performances included shows in Indian cities as well as Singapore, to enthusiastic reviews.

'Company Gavin Robertson' (CoGR) was founded in April 1997. Historically, work has been funded by Arts Council Scotland, ACE, and with co-producing venue partners.

To date it has produced FANTASTICAL VOYAGE (1997 - 2000 by GR and Andy Taylor), SPITTOON (2000 -2003 by GR and Wayne Forester), THE SIX-SIDED MAN (2001 by GR with Andrew Dawson, with subsequent international tours in 2010/2011 and ongoing performances) I AM WHO AM I (2003), and from New Zealand, BLOWING IT (2003/04 by Stephen Sinclair and Stephen Papps) for national and international touring.THE DAY OF THE TRIFFIDS (2005) was a co- production with The New Wolsey Theatre in Ipswich, and in the same year the Company created its first production for a younger audience, MESSAGE IN A BOTTLE, from a story idea by Gavin Robertson, co-devised with Andrew Dawson and Robert Thirtle. THIS STARVING LIFE, with increasingly-famous actress Rebecca Grant, was devised in 2006.

Two further shows for aimed at younger audiences have followed: A GRIMM WORLD, and VAMPIRATES, the latter in 2011/2012.

The company is currently presenting CRUSOE: sand, science, sex, sea and a solo performance! You can read more on the dedicated show page, using the buttons on the left of this website...

Gavin has previously formed a working relationship with 'Scene Productions', Co-producing and directing first with THE OTHER SIDE (2009), then VAMPIRATES (2011) and in Autumn 2012 with FALL OF THE HOUSE OF USHER'... in 2016 another production will undergo R&D.

Gavin, as Artistic Director, also works away from the company and in the Edinburgh Festival 2003 appeared as 'Juror 12' in the double award-winning production of '12 ANGRY MEN', starring Bill Bailey and directed by Guy Masterson. This was followed by an Australian and New Zealand tour in 2004.

In 2004 Gavin also appeared in the award winning production of 'ONE FLEW OVER THE CUCKOO'S NEST', directed by Terry Johnson and Tamara Harvey, with Christian Slater and Mackenzie Crook, beginning at the Edinburgh Festival before transferring to The Gielgud Theatre in London's West End where it ran for a six-month sell-out season. In 2006 it ran again at The Garrick Theatre, and Gavin then toured the UK with Shane Richie and Sophie Ward in the lead roles.

In November 2004, Gavin was asked to direct ‘RECIPES FOR DISASTER' for DC Entertainment at The Comedy Theatre, again in London's West End - a show that introduced science to a young audience - before a national tour and performances in Indonesia.

He also directed 'THE THIRST' at the Leicester Haymarket in 1993 which ran for six weeks, and has produced live literature events ranging from author Luke Rhinehart's sell-out appearances in The Brighton Festival, to touring his own show, 'SHORTS' through the UK and abroad.

Prior to forming CoGR, Gavin had a successful partnership with Andrew Dawson, again touring nationally and internationally as MTP, most famously creating, and performing in, their cult comedy, THUNDERBIRDS F.A.B. which has now had six seperate West End Seasons between 1989 and 2002 at: The Apollo Theatre (x2), The Mermaid Theatre, The Ambassadors Theatre, The Playhouse and The Aldwych. It has also toured numerous times internationally.

Other shows from their partnership included a three-man version of 'THE THREE MUSKETEERS', directed by Olivier-award winner (WARHORSE) Toby Sedgwick; 'WHAT IS ALL THIS DANCING?' featuring Jos Houben (a founder member of Theatre De Complicite); and 'SPACE PANORAMA' which twice opened West End Seasons of the hit Thunderbirds spoof.