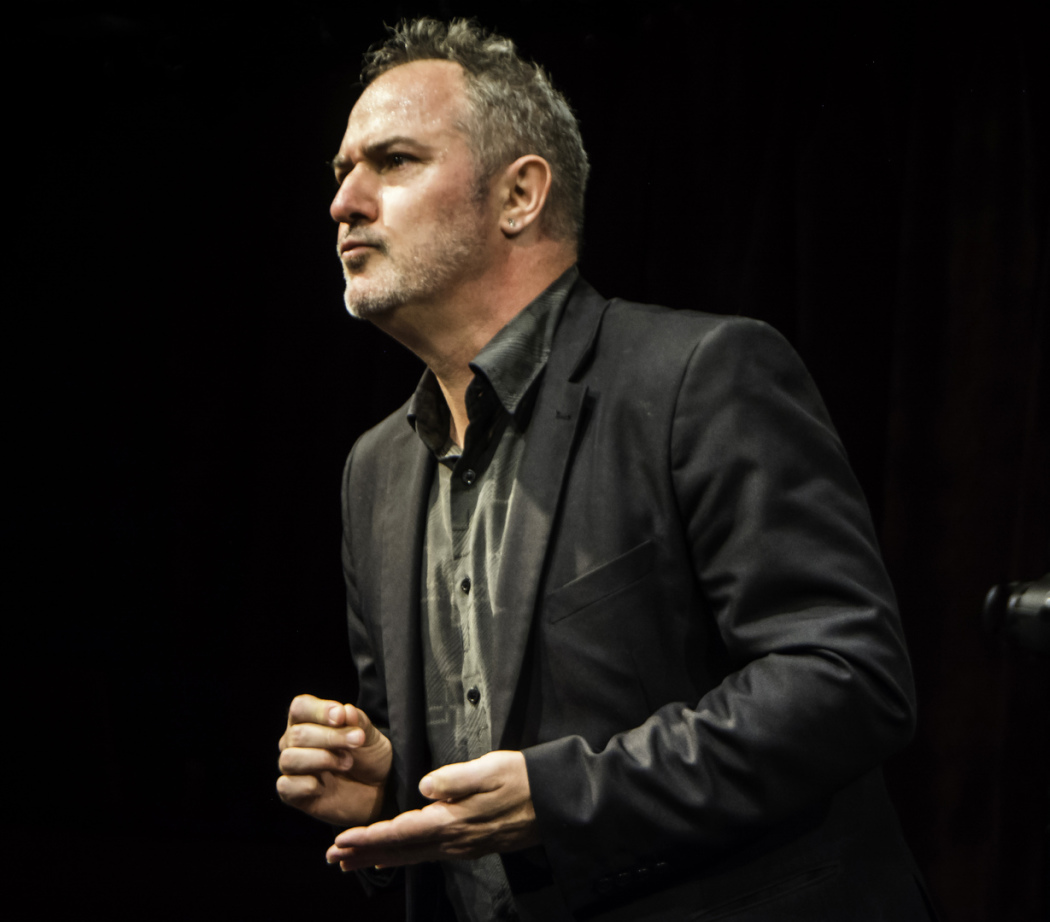 The solo show by Gavin Robertson.

This unique and darkly comic solo show creates an urban and cinematic world where a Hitman, ‘a middle-aged white male’ and an Alzheimer’s sufferer share their stories and thoughts, amid the mishaps of being single – cunningly interwoven with the classic ‘Crusoe’ story and an exploration of ‘Big Bang Theory’!

A focused blend of precise movement and bold images, supported by an original atmospheric soundtrack, and an undercurrent of dark hilarity.

"Gavin Robertson gives another magnificent performance in this one-man show. The sections of pure movement, all performed to an enveloping soundscape and some well-chosen popular songs, blur the line between mime and dance. These segments link the characters and the action together, foreshadow the storyline to come, and throw Crusoe, trapped on his famous island, into the mix as well.

As he moves around the stage we witness Robertson don the personality of the characters; each distinct and interesting. He is flamboyant yet touching as John, who has been diagnosed with early onset Alzheimer’s and must live on, as his memories and words leave him. Humour is plentiful in his presentation of Phil, who has been dumped by the girlfriend he met online and finds himself entering the foreign world of nightclubs and face-to-face romantic hook-ups. His transition into the old man is most physically impressive, as he moves about the stage with seeming difficulty and spouts life-lessons, the legacy of his experiences, while delivering flowers to his deceased love.

This is a moving and interesting production; much beauty can be found in the exquisite movement sequences, while the dialogue based portions are intelligent and deeply thought provoking".

"Finding meaning in a world which is seemingly disconnected, unfair and often impossible to negotiate is at the backbone of Gavin Robertson’s solo performance. Crusoe draws upon scientific theory about the universe and looking at the physical effects of both loneliness and illness, with Robertson flipping before four distinct, but interconnected men. The interconnectedness of the characters is resonant of themes also discussed by Complicite's Simon McBurney, both in his Open Meeting with Sick of the Fringe last week, and currently in The Encounter, which looks at the impossibility of one man being an island. The piece’s title (not referred to by name in the work) recalls the journey of the stranded Robinson Crusoe, one man finding meaning amongst the solitude – and here Robertson mines the quiet and the isolation for a greater understanding of how we connect and disconnect in a contemporary age, and the political and transformative potential for connecting with others (and with ourselves). While Alzheimer’s plays a pivotal role in one of the character’s lives, the work is less about forgetting and the difficulty of forgetting and more about larger philosophical questions about both what exists in place of memory, and how we must look closer in order to see connection between ideas and people which may not be obvious at first glance".

"Robertson is also a gifted physical actor, adept at mime, as he tells part of the story through a series of physical action that is masterful. The movement is often abstract, but if you watch carefully there are several gestural motifs that are reinterpreted in pure movement from the play.

Each of the characters is his own island, with life issues – they are very relatable either from our own experiences or from someone we know. Time passes and we adapt and try to find solutions or make changes in our outlook. Questions about the dichotomy of humanity and science are posited, provoking us to think about how “everything came from nothing” and cause and effect theory where “there must have been a before”. While these are the big themes of life, Robertson makes an interesting case and leaves us with a  moving final thought, or is it an order? In any case, we could do well to consider it.

This is an elegant and thought-provoking performance. Robertson and his articulate crafting of the piece are suave, and the original music and sound design by Danny Bright could be the most beautiful of the Fringe. The musical variety is visceral, luxe, jazzy and more. It can not help but make you feel something – and be transported".

"Robertson’s "Crusoe,” was a complex, kaleidoscopic, multi-character contemplation of our loneliness as individuals, as a species and as a planet.

Gavin Robertson proves, among other things, that mime doesn’t have to be annoying. In his “Robertson’s Crusoe,” he weaves together a series of characters and narrative threads which eventually coalesce into a thought-provoking whole. He’s an eloquent writer but much of the performance relies on his physical theater skills, which are exceptional. The director is Nicholas Collett.

Performing in a black suit and open-collar black shirt, Robertson creates vivid images – cityscapes, urban bustle, deserted beaches, a flat ocean horizon. His characters include a professional killer, a man descending into Alzheimer’s, a man discussing his failed relationships and a castaway on a desert island. There’s also a discussion of the Big Bang Theory and Robertson ties it all together into a fascinating reflection on isolation. Much of it is sobering but a sharp-edged sense of humor also runs through the piece.

Integral to the theatricality of the show is Danny Bright’s original music and a sound design that helps move us from location to location.

This show demonstrates a carefully calibrated tone. The actor is in total command of the material and the results are impressive".

"The categorisation of performances at the Fringe can sometimes be confusing; lines blur between theatre, physical theatre, dance, circus, comedy… Billed as both dance and physical theatre in the programme, Gavin Robertson’s one-man show Crusoe was a pleasantly surprising blend of both and neither.

With no props, no costume changes and a minimal stage set, Robertson creates whole worlds through dextrous use of mime, his voice and facial expressions, and a little help from sound and lights man Alex Wright. Philosophical in bent, the performance addresses themes like the modern malady of loneliness in an increasingly socially-networked age, as well as memory and its role in constructing identity. Tying it all together is a meditation on the Big Bang and the origins of our universe.

Robertson is a deeply talented performer, switching between the different characters that people his created cosmos seamlessly. All of his characters are lonely men, whether alone by virtue of their failure in relationships, a physical complaint (Alzheimer's), or physical circumstances (marooned on a desert island).

With the exception of a slightly meandering mimed sequence on the daily work of a hit man, the piece is well paced and well written. Particularly effective are Robertson’s evocation of the poignancy of the Alzheimer's sufferer’s plight and the comedic highlights offered by the middle-aged man who goes to a club to try and get ‘back in the game’.

Although ending on a hopeful note, this is essentially a dark work with touches of black slapstick humour. Nonetheless, Robertson’s virtuosity as a performer makes this piece a delight to watch" ﻿ 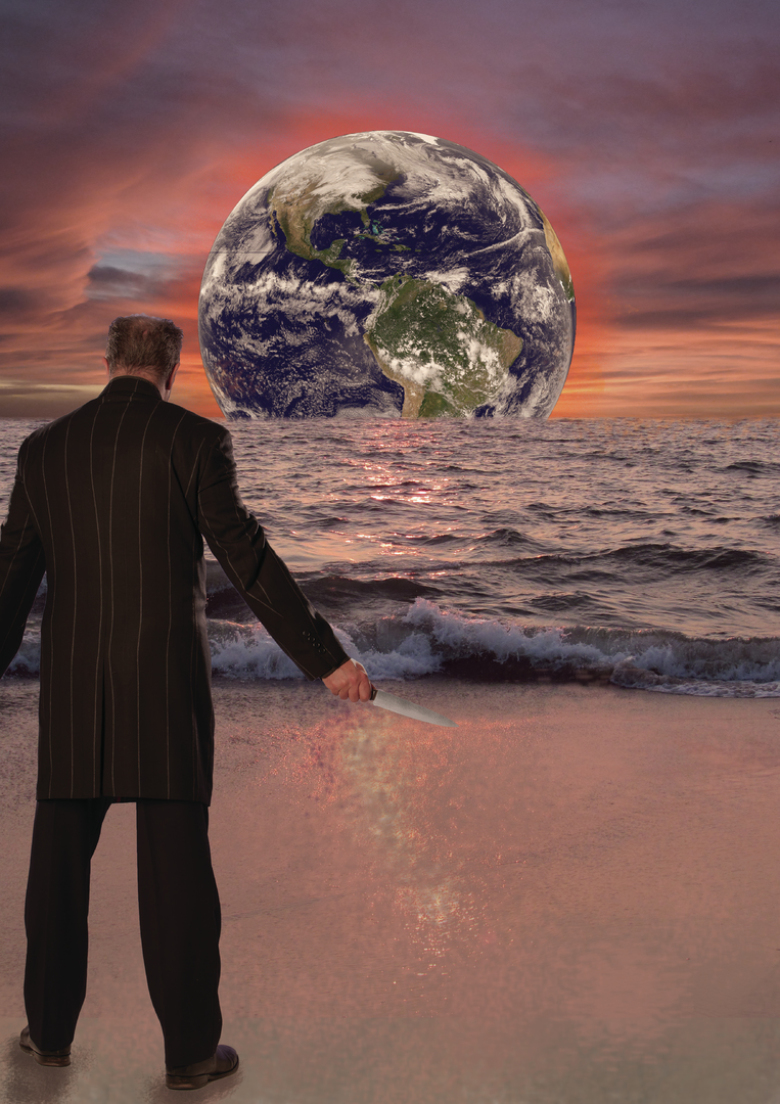 "Gavin Robertson presents a solo show that ranges from Bounce Theory to Alzheimer's, relationships between people and between stars. Robertson's Crusoe stands at the centre, as do we all, individuals, beached in an inexplicable universe, connected yet alone, each stranded on our island of uniqueness (and separateness), a sum of our memories and perhaps, nothing more. From the first moment, this hour at Zoo Southside invites us to sit forward and watch. Robertson places his characters carefully, and delineates them well. Tight, meaningful lighting and soundscape; A simple gesture and we look to where an invisible object or person becomes visible in our imaginations. He points, we see.

It's creation realised on stage with simple genius. Much of this piece is an unspoken, assumed collaboration between audience and performer as his mime and movement create objects, people and places before us. This is what Gavin Robertson does with such ease and flow. At one point he creates an entire city before our eyes (and magically in your minds-eye too); and he does it with his eyes, his hands (which can even invoke a believable and beautiful sunset), with minimal gesture and loving physical movement. And it is there, both before us, and in the landscape of our imagination. Anyone distracted or not giving full attention in the audience, will lose the thread. Certainly for this select audience, Robertson held us for every second.

This is a collage of characters that feels mostly centred on a man with Alzheimers. It is touching, powerful and Brechtian. I caught myself encountering myself in the mirror of this piece on more than one occasion. In places this is truly electric, Gavin Robertson creates worlds with his hands, dramatic tension with a turn of his head. This is rare, priceless performance. There's comedy too as the lives of different characters swirl into focus, then melt back into the tableau. This isn't the classic tale of Robinson Crusoe. But it's a clever and often wise treatment of man in the cosmos, of alone and together, of love and loss, of memory and identity, of bounce and stability. It's playful, full of invention, and yet also based in some very traditional and well-worn mime and even clowning. Classy, textured and beautifully precise physical theatre, well written monologue, amounting to a must-see solo show."