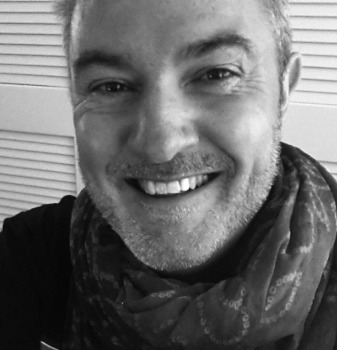 Gavin Robertson comes from a physical theatre background (Lecoq, Kemp and Gaulier), producing, creating, directing and performing his own work for national and international touring. He has created a diverse portfolio of productions historically funded by ACE  including ‘Spittoon’, ‘The Three Musketeers’, ‘The Six-Sided Man’, ‘Fantastical Voyage’, ‘I Am Who Am I’ and many others, infamously, ‘Thunderbirds F.A.B.’ which played in London's West End on six separate occasions between 1989 and 2002. Each of his productions has toured internationally via The British Council, independent producers and Festivals, including several tours to Japan, Australia and New Zealand, the USA, Singapore, Tunisia, Senegal and Morocco, as well as Hong Kong, Lebanon, Turkey, Oman, Brazil, Chile, Taiwan, Senegal, Costa Rica, USA, various European countries, and many others.

Since 2002 he has also produced original productions for a younger audience beginning with ‘Message in A Bottle’, and followed by ‘A Grimm World’ . These both toured the UK, with performances in Finland, Eire, and The Netherlands. In 2011 a third play was added (co-produced with Scene Productions)- ‘Vampirates’ – based on the first book in the cult series by author, Justin Somper.

Other projects have included Producing and Directing ‘The Thirst’ at the Leicester Haymarket Theatre; Co-producing ‘Hopeless Games’ with German based Dance Companies Do-Fabrik; Co-Producing and Directing the first-ever stage adaptation of ‘The Day Of The Triffids’ in association with The New Wolsey Theatre, Ipswich; Directing ‘Recipes For Disaster’ at The Comedy Theatre in the West End (for Producer Dan Coleman); and appearing in the award-winning ‘One Flew Over The Cuckoo’s Nest’ with Hollywood movie-actor Christian Slater at both The Gielgud and The Garrick Theatres in its two West End seasons in 2004/05. He has also directed Jos Houben (Complicite) in ‘What Is All this Dancing?’, and worked with ‘Warhorse’ Olivier-winning choreographer Toby Sedgewick.

Prior to this he played ‘Juror 12’ in the award-winning production of ‘12 Angry Men’, with TV celebrity Bill Bailey and a host of stand-up comedians from Jeff Green and Owen O’Neill to Stephen Frost and Phil Nichol, which also toured to Australia and New Zealand. In 2007 he toured again as ‘Frank Scanlon’ in the national tour of ‘One Flew Over The Cuckoo’s Nest’ with Shane Richie and Sophie Ward in the lead roles. He toured for ten months with The Birmingham Stage Company in the number one tour of ‘Treasure Island’, as ‘Long John Silver’. In 2008 he also co-wrote and directed ‘The Other Side’ for Scene Productions.

Around this time he also joined Eastbourne College as Artist-In-Residence, where he continued mentoring until 2022.

In 2009/10 he co-created ‘2010-A Space Oddity’ for UK touring and performances at the Edinburgh FestivaL. In 2011 he performed in ‘The Six-Sided Man’ in the Adelaide Festival, Australia (mid-Feb to mid-March) and returned in 2012 having directed writer/performer Nicholas Collett in ‘Spitfire Solo’.

He has made many worldwide TV appearances as part of his theatre career, including a mini-series for Fuji TV in Japan, which he also wrote and featured as a performer, and his voice can be heard on various TV documentaries for the BBC and commercial channels including ‘Cutting Edge’, ‘WW2 In Colour’, Dispatches’ and ‘Arena’; this has also included TV reality show ‘Classical Star’ for BBC2, commercials for radio and TV, from VW, to BMW and ‘Feasters’ and numerous others.

He is also a former Drama Advisor to the Arts Council of England, and former Board member of Trinity Theatre, Tunbridge Wells in Sussex, UK.

In 2012 he produced 'Crusoe’ (a solo performance) in association with Nottingham Lakeside, and The Civic, Barnsley; and a third co-production with Scene Productions for UK touring, his own adaptation of ‘Fall of The House of Usher’.

In September 2012 he delivered three lectures on his work onboard the 'Azamara Journey' cruise liner, touring through Italy and France, via Florence, and in December performed 'Crusoe' in Kansas City, USA, as part of the 'British Invasion' Festival, where he returned in 2013 to perform his new solo work, Bond, along with The Six-Sided Man.

In June 2013 he designed and directed Bollywood Kee-Maa in India for Evam Entertainment, which subsequently toured to Singapore, and also took three different shows to Australia.

Projects in 2014 included writing, producing and directing Mata Hari-Female Spy and UK touring of Bond with return visits to USA and performances in Russia as well as Edinburgh Festivals.

In 2015, he continued to tour Bond, (including a mini three-city tour in the USA)  Mata Hari and Crusoe, as well as directing 'Nelson' for Nicholas Collett (their second collaboration).

2016 started with directing a third solo show Your Bard for Nicholas Collett in Florida, via Escape-To-Create (a USA-based Residency) dates with Bond and a re-staging of his adaptation of The Fall of The House of Usher in Kansas City, USA (see show page) in July, plus two shows at the Edinburgh Festivals, (The Six-Sided Man, Escape From The Planet of The Day That Time Forgot!) and a three-week, three-show Season back in Florida, USA.

2017 saw an anniversary tour of The Six-Sided Man plus the launch of 'Greg Byron' (his Performance Poetry persona) in Brighton UK, and the Edinburgh Festival. A third return to Florida, USA in Autumn for a month, plus a second tour of Mata Hari - Female Spy.

In 2018, 'Greg Byron' performed in the Brighton Fringe as well as Adelaide, Australia with a return to the Edinburgh Fringe in August, and dates in Autumn. As an actor he played 'Dr Greenson' (Marilyn Monroe's psychiatrist) in THE MARILYN CONSPIRACY for Guy Masterson's 'Theatre Tours International' in the Edinburgh Fringe, followed by performances of 'BOND!' and 'MATA HARI FEMALE SPY in the Autumn.

2019 - performances of BOND! The creation and touring, with Nicholas Collett, of DONE TO DEATH BY JOVE!

A third consecutive visit by 'Greg Byron' to the Edinburgh Fringe, plus tour dates.

2020 - DONE TO DEATH BY JOVE! Plus (during Covid) the creation, with Nicholas Collett, of THE GHOST OF A SMILE. Obviously between 2020 and 2022, there was a long pause due to lockdowns! During this he was commissioned to write a play, with Nicholas Collett, called LEND ME YOUR EARS (based on Shakespeare's works) for The Rep Theater, in Seaside, Florida.

Prior to those lockdowns - Performances of BOND in Australia.

2022 saw the resumation of UK touring with the three current productions, and a fourth trip to Florida for another three-show Season.

2023 - so far - has started with a fifth journey to Florida to creat a second commissioned production  FRANKENSTEIN -THE 3D PODCAST -LIVE! In February he takes DONE TO DEATH BY JOVE! to the Adelaide Festivals.

Gavin is also currently an Associate Director of The MET (Moscow English Theatre) in Russia.