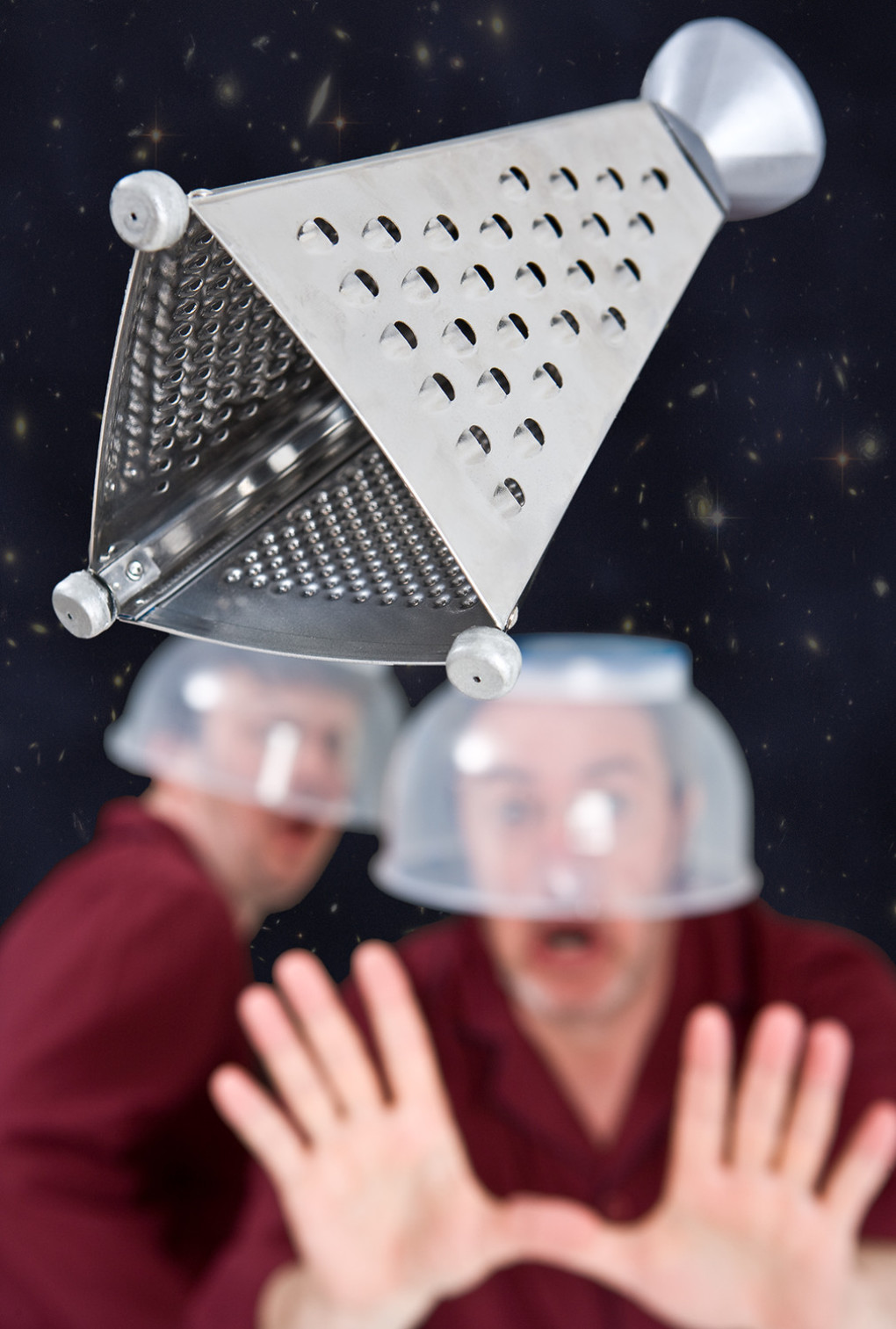 Produced by CoGR and Bex Productions:

For Chip Huston and his Commander this was an exciting voyage to Jupiter to investigate the strange signal emanating from its surface. But then they discover the ruins of the previous mission spacecraft in orbit around the planet. After losing contact with Earth, encountering strange forces on the ship, and battling its seemingly paranoid and unhelpful computer, their doomed assignment takes on a whole new direction … while the fate of the World hangs in the balance…

With cinematic influences ranging from ‘2001’, and ‘Sunshine, to ‘Armageddon’ via ‘Alien’ this dynamic and ridiculous comic homage to space movies is overly dramatic, packed full of clichés and utterly silly from start to finish - a cartoon movie for the theatre!

Every space movie you've ever seen in an hour and a bit!

With every spacecraft played by kitchen implements!

"...the actors do not miss a trick – the use of kitchen implements to represent spaceships is never explained but the audience had no need to care, watching with baited breath at the ‘docking’ of a grater with an egg whisk and laughing in delight at the ET-esque use of fruit to represent the planets. Everything is created from a few basic props and the actors themselves – they produce everything from sound effects to flashing lights, video link ups and sliding doors. Actors and puppeteers are told that if you believe something is true on stage, the audience will also believe it and this is never truer here.

But despite all the physical theatre, the icing on the cake for me was their witty use of the clichéd language of science-fiction b-movies. The William Shatner-esque moments of faux passion complemented the brazen use of direct film quotes, unashamed name puns and a little bit of bathroom humour thrown in for good measure.

Hugely creative, cheeky and complete with a big heart - if a play is about playing, then this is playing at its best".

"It is this melding of Kubrick and others’ tales, inventive stage reimagining and the addition of megalomaniac time freezing, planet shrinking aliens that makes this an accessible and thoroughly entertaining show. Both men demonstrate exemplary mime skill, automated doors whiz and whistle open and shut with Chip floating in zero gravity and the Major guiding the ship’s telemetry, combining it with great comic flair where chocolate/wood/micro chip puns abound. Yet the best element of the show is  tthe breadth of the intertextual references and how regularly they come around; if you don’t get one joke there’ll be another along in under 20 seconds. Gavin Robertson’s Major Tom is a wonderful study of the genre’s chippy captains vowing to never lose another man whilst Jonathan Bex as Chip Huston jumps from wide-eyed rookie scientist to coughing mad-cap geriatric to cold, calculating ship’s computer with ease. In the programme notes they describe the show as one with a story ‘familiar though original’ and 2011 never fails to deliver this: the pyjama clad spacemen boldly go where we think, but can’t be sure, we’ve gone before".

Made for the Edinburgh Fringe and UK touring in 2010, it returned in 2011 as an official sell-out, and also toured to Moscow, Russia.