ESCAPE FROM THE PLANET OF THE DAY THAT TIME FORGOT! 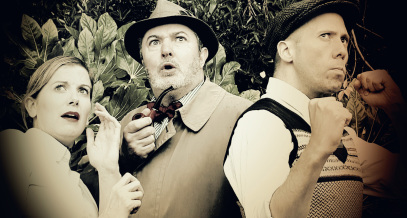 This show kicked off in 2016, performed by Gavin Robertson, Katharine Mary ('Mata Hari - Female Spy', 'Vampirates', 'Fall of the House of Usher') and Simon Nader ... 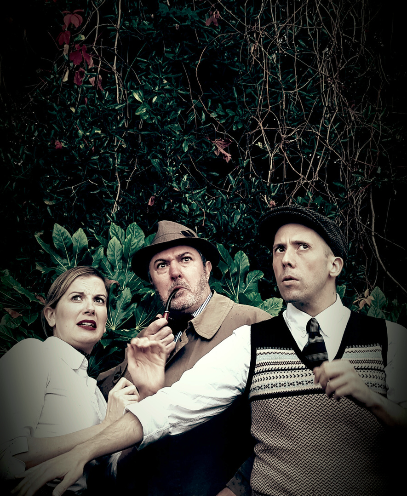 There’s a Professor with a rocket in the cellar, his physics-savvy female ward who screams quite often, and his impoverished lab assistant (the lucky chap!) and together they find themselves marooned on a distant planet before escaping to… where exactly!?

Think a hotch-potch of silliness drawing from  'The 39 Steps' and ‘Quatermass’ via 'Journey to the Centre of The Earth', and 'The Land that Time Forgot'... danger, dinosaurs and a whole pile of pluck along with an invisible dog and several sets of 'jolly hockey sticks'.

"Let’s just appreciate that title for a moment. It’s the sort of glorious title an eight year-old would come up with for their yet-to-be-improvised-in-the-back-yard home movie. The entire show pursues that kind of home movie feel: the set is composed of a series of stacked and painted cardboard boxes; an ironing board becomes a rocket; the dialogue is deliberately cringeworthy; the performances are beautifully hammy.

The three protagonists are also all pointed stereotypes. We have the working class lad with a heart of gold, Alan, played by the 'very bald', and very funny, Simon Nader. He accompanies the boffin-y professor, Sir Oliver (Gavin Robertson), and the professor’s niece, Helen (Katharine Mary — a standout performer amongst a strong trio). Helen fulfils the role of ‘The Woman’ and she’s allowed to tag along because, as the professor points out, someone will have to do all the screaming.

Aside from the obvious love of sci-fi, 'Escape' is infused with an unmistakable love for theatre, for all things theatrical. And the way it expresses that love is with a slickly put-together production that aspires for an ultra-amateur vibe. 'Escape' revels in highlighting the usually-hidden seams holding the whole shebang together. Scenes which exist simply to pass the time, expositional dialogue, outrageously convenient plotting — all these and more are parodied to hilarious effect.

The faux-shoddiness of this play, however, masks a great deal of sophistication. The ingenious set morphs between a house, helmets, a spaceship, an ancient sentient alien ruin, an avalanche, and more as the scenes demand. In addition to the set itself, the use of mundane materials — a giant bit of cling film comes to mind — are used to produce quite an amazing sense of place. The actors too are impressively metamorphic, alternating between a huge number of characters — dinosaurs, monkeys, plants included — with a great instinct for instant characterisation.

Escape from the Planet of the Day That Time Forgot is a hyper-self-aware love-letter to 20th-century sci-fi that’s gleefully unafraid of cheese. A cholesterol nightmare, then, but a guilty pleasure. Just take a few statins and enjoy the ride". 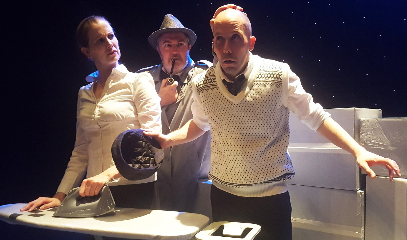 Escape From the Planet of the Day That Time Forgot is a title as zany as the story that unfolds: A reclusive scientist, his attractive female ward and his devoted laboratory assistant time-travel on a rocket — before there was such a thing — to planets unknown. Gavin Robertson, who so memorably mimed Bond! An Unauthorised Parody (and, last year, Crusoe: No Man Is an Island), and his talented co-stars, Simon Nader and Katharine Mary, spoof science-fiction B-movies — The Day of the Triffids, The Time Machine, etc. — through their consummate collective skill in physical theater and mime.

Those who saw Robertson re-enact a Bond-style car chase using toy cars will have an idea what these performers can do with an ironing board (I‘ll never see mine the same way), a handheld vacuum, a sheet of plastic and a pile of boxes, as they traverse the universe, confront carnivorous plants and meet Norse gods while gathering scientific samples and doing research. There’s plenty of tongue-in-cheek dialogue, too. The jokes are self-referential, sometimes subtle and other times broad, with nods to B-movies, sex and women’s rights. The ward, Helen, who’s brought along to do the screaming, we’re told, will be too busy with housework to help with the science, even if she’s the brightest of the bunch. “She’ll be wanting equal pay next,” her uncle moans, then laughs.

Escape from the Planet of the Day That Time Forgot

The Professor takes his eager ward and her friend to outer space – it’s a no frills, lots of laughs filled ride of cliché characters that transform their home and themselves for the Sci-Fi adventure.

This is an original devised show based on cliché characters that get caught up in a sci-fi adventure. A rollicking good time is had by all – not only by the audience but also the actors onstage, who seem to thoroughly enjoy playing their characters and sharing this story!

A jovial professor (played by Gavin Robertson) has the brilliant idea to go to space seeking a planet, taking Helen (played by Katharine Mary), his eager ward Alan (played by Simon Nader), her friend who always wears a cloth cap. There’s a definite hierarchy in the group and everyone knows their place. The story unfolds on a stage with several stacked cardboard boxes and a few carefully chosen props, such as an ironing board. This low-tech design sets the tone for the no frills, lots of laughs show. For the ordinary ironing board is quickly enlisted to become the rocket and it is the utter belief of the actors that they pull this off. In fact, the vivid imagination of the trio and their strong performances are so amusing that the audience is quickly swept up by the absurdity, too.

The three excellent actors play stereotypes of characters from years gone by – when women mainly exist to do housework – but there are several witty twists along the way, which make this an interesting peek at the past and a tiny bit into the future. Pacing is fast and the lines of dialogue are punched with emphasis that brings out the comedy and rhythm of the piece. Exaggerated physicality and facial gestures add to the broad acting style that is very engaging and entertaining.

The playfulness of the trio as they journey into the depths of beyond is infectious. Expect the unexpected in this journey.

This rocket adventure takes the brave pioneers far away, all around and back again. It’s part bonkers, part tongue in cheek and never dull. On the surface, it’s a simple story but it is the way that the ensemble uses the space, interjects clever short bursts of physical comedy and delivers asides with relish that make this show so successful. While we will learn a little about space from this adventure, it may encourage us to reflect on some of the social themes in the play – that’s always a good thing – and above all we will be thoroughly entertained.

The actors produce this brisk style of comedy really well, but it is the surprises in the script and how they break through the initial performance style into wilder moments that hold the audience to the end. They make crazy transformations into wondrous beasts and more. In total it’s a delirious romp through a few decades of humanity and space travel that will uplift everyone.

"A fierce talent for comedy is not amiss among any of the three performers that take the stage in this production, as they are ambitiously tasked with the portrayal of a journey to another world (and back again) in the space of one hour. This is not the only challenge: the demographic ranges from six to 66, but the show does not disappoint.

From the nitrogen hydride fuel ratio to emojis, the cast ensure all are catered for. The set is necessarily simplistic within the intimate black box theatre, and it is used to the fullest potential in endearing creativity. With an innovative “sprinkling of imagination” we believe an ironing board to be a rocket, a cardboard box to be a Norse God and a sheet of cling film to be a river. The audience are not dissatisfied by their three characters: a Conan-Doyle-esque friendly Professor, “The Woman” – to ensure a bit of ironic misogyny is thrown in – and a working class Yorkshire lad stirred in for added charm.

At points, the script is aggressively obvious in its comedy, but not so much as to leave the audience with a bad taste. Katherine Mary’s performance should be mentioned for it’s bravery, as she goes so far as to actually nibble a member of the audience whilst impersonating a Velociraptor – let’s hope she isn’t a method actress.

Although a verbose handful by name, Escape from the Planet of the Day That Time Forgot blends a simplistically comic script with slick interaction, sailing us back to the imaginary worlds of our childhood that we perhaps forgot had ever existed".

"A fierce talent for comedy, an intergalactic blast!"