DONE TO DEATH, BY JOVE! 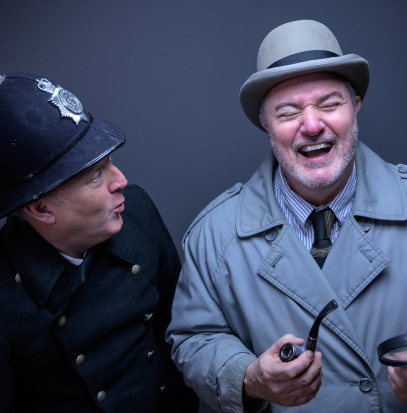 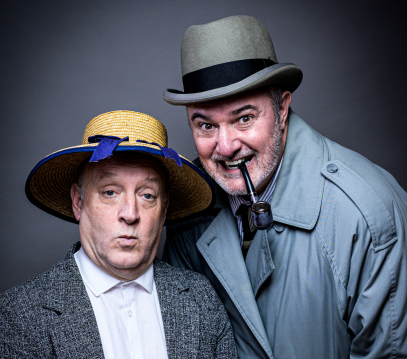 The Great British Detective tradition! Holmes and Watson meet Poirot and Miss Marple (alongside the usual suspects) in a spoof homage - who murdered Lady Fanshawe!? Why is Matron Maudesly so friendly with one of the guests at the Clinic of Hopes and Cures!? Why have the sound cues got mixed up?

Made all the more tricky to tell, as theatrical knights, Sir Gavin of Robertson and Sir Nicholas of Collett attempt this 6-actor show, given the other 4 are stuck in a broken-down van on the M6. With only the two of them to play all the assigned roles, what could possibly go wrong?

Re-interpreting 'The Art of Coarse Acting' with a farcical result, it's time to guess WhoDunWhat and how...

Here's a review from August 2022 from the Edinburgh Fringe Festival -

"Hilarious and quite brilliant! The super-talented twosome assume various guises, even playing scenes holding multiple hats, representing the absentee cast. Holmes and Watson (their main roles) become a multitude of characters ,and, sometimes it's hard to tell what is impeccably rehearsed and what is impishly improvised.

Either way they act their hearts out. The sweat pours, the laughs roar, and the audience give a well-deserved standing ovation. Equal plaudits to Nicholas Collett and Gavin Robertson, who brilliantly saved the day. If you can only see one show at the Festival, see this! Excellent, by Jove!"

"Both actors are fine examples of their creed. That they have found themselves in a medium which suits them perfectly makes our joy all the more widespread. Their ribbing each of the other is tremendous and adds to the plot as we also get to hear the machinations of a touring company as well as the petty jealousies that can bubble and threaten but often just bubble back down again.
Comic timing is impeccable".