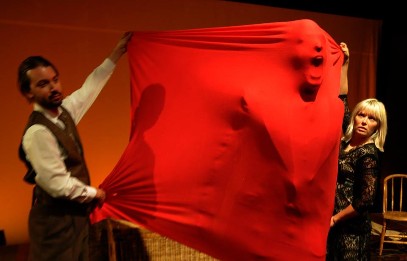 In July 2016 Gavin directed three American actors (Heidi Van, Ken Sandberg and Zack Chaykin) in a production in Kansas City. In a substantial re-staging of the show, a new lighting design and set were used whilst retaining 99% of the script. It's always a creative joy to re-invent a previous production and this was no exception. Enjoy these other images below:- 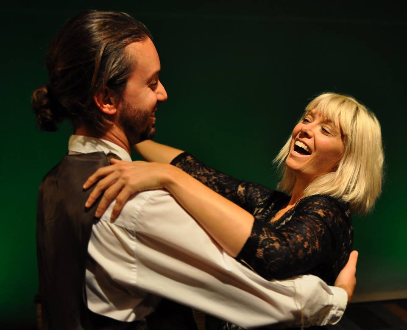 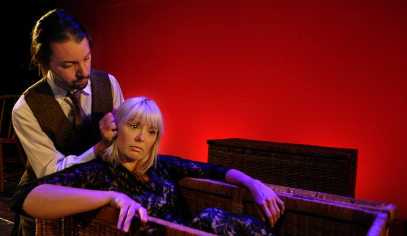 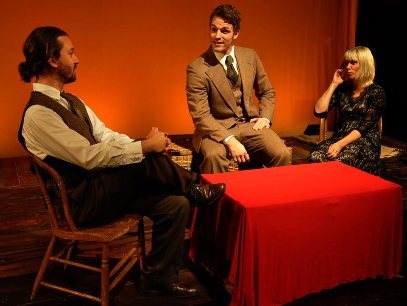 Stand up and cheer for the trio of actors who undertake the dark but creative mind-set of one of Edgar Allen Poe’s classic terror tales, “The Falll of the House of Usher,” one of his many stories that adapted into film.

The talented trio takes the audience into the darkness and melancholy of the Usher family and the stately mansion known as The House of Usher.  The family who preserved their bloodline with inbreeding and incest find the last two living Ushers trapped in their own lair.

The gloom and doom of the house and the inhabitants ensnares the best and only friend of Roderick Usher (Ken Sandberg) after he requests his friend (Zack Chaykin) to come and help him understand the undiagnosed illness of his sister, Madeline (Heidi Van).  Madeline appears dead but then erupts in fits of madness rage.

Madeline appears the victim, but is she the victim, or is it Roderick?  Or, could the friend/visitor become the Usher’s victim?

Adaptor-Director Gavin Robertson ‘s haunting vision of “The Fall of the House of Usher” definitely resonates.

The original music by composer Danny Bright adds to the atmosphere of doom and foreboding.The beauty and diabolical description of Edgar Allen Poe adapt well to this play as the narrator explores Poe’s prose.  His vocabulary and dark motif come alive with the narration.

Information on the original 2012 production is below - 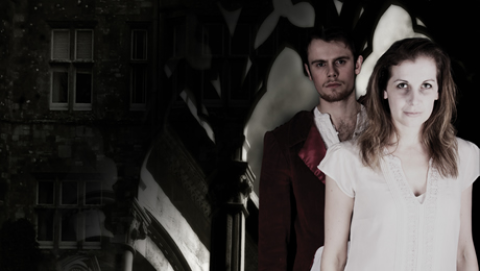 A brand new adaptation of The Fall of The House of Usher, after Edgar Allen Poe

Directed and Adapted by Gavin Robertson

“…as the shades of the evening drew on, within view of the melancholy House of Usher, I know not how it was – but, with the  first glimpse of the building, a sense of insufferable gloom pervaded my spirit.”

With these words beginning the classic story by Edgar Allen Poe,  one of the most famous Gothic stories unfolds.
Scene Productions and Gavin Robertson now bring this atmospheric and haunting tale to life on the stage.

With original music from ‘Vampirates’ collaborator, Danny Bright, this three-man cast create the characters of Roderick and Madeline Usher, as well as the un-named ‘narrator’ and of course, the fourth character- the gloomy crumbling Mansion itself inside which the fearful characters live out their chilling tale. 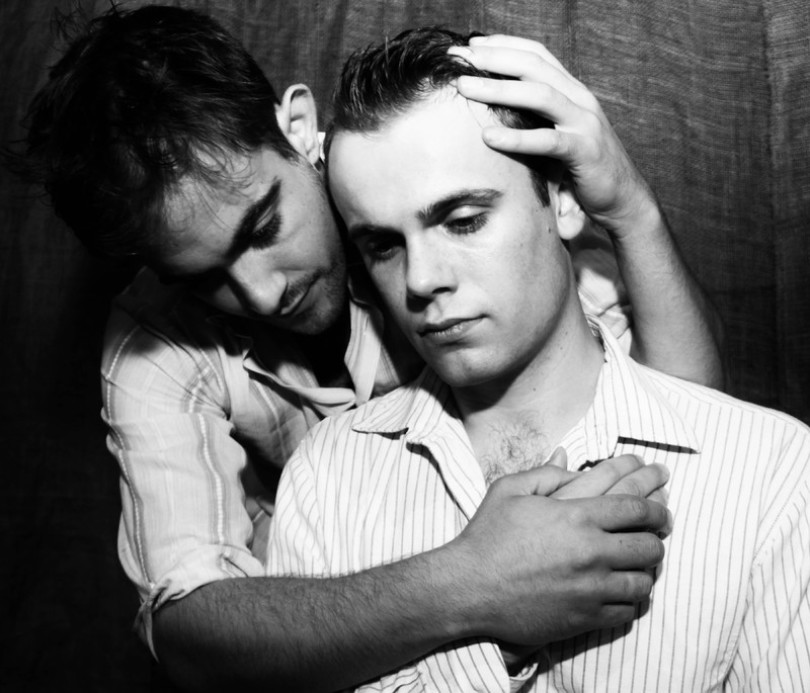 ‘THE FALL OF THE HOUSE OF USHER’

Taking on adapting the story of Poe’s ‘Usher’ for the stage I was immediately aware of two things: 1) the story is a short story, not a novel, in which not a lot of action actually takes place, but is all atmosphere and creeping tension 2) although ostensibly a story with three characters, the fourth character is the ‘house’ itself. These two put together pose a significant challenge.

Theatre is not a movie! In a film, there is usually at least, an attempt at realism – it draws its audience into the world on screen and – in the case of a ghost story for example – we are scared precisely because everything seems plausible, in real places…of course, with the film-maker’s additional toolbox of special effects and underscore even more is possible.

The problem with theatre is we all KNOW it’s not real – from the moment the audience enter the auditorium, it’s going to be ‘pretend’...artifice, invention - however well done. So how can we hope to impress or achieve an emotional reaction to something ‘live’ and simultaneously artificial?

Well – one answer is to use our craft to trigger the imagination of the audience. We can’t have a gothic mansion onstage, but we can describe it, we can suggest it, or parts of it such as a bedroom, a vault, a bathroom... and if we do that with enough authority, panache and belief, the audiences’ imagination – which is the theatre-maker’s most powerful tool – will be far more visceral than any attempt of ours could be.

And we do have sound – both in terms of design (creaks and groans, breaths and ‘textures’) and underscore which is more melodic, or musical – just like a movie in fact. I always knew that in this production, the textures and sounds we used to suggest the sentience of the House itself would be paramount to any successful telling of the story- and we are fortunate to have Danny Bright- who really does understand the job of both sound in general, and what actors need to rehearse and use it – to the nth degree.

My own style (and this is the third time I have worked with Scene Productions) has always assumed a large input on the part of the audience. In other words I arrogantly expect them to join dots with clues I provide, in order to follow a narrative. And why not! It’s not television, it’s theatre, and you should concentrate, be drawn in, make decisions, and see if your choices lead you to the same understanding of what’s going on, and the story I want you to experience.

In addition to my own love of neat imagery, inventive storytelling in THIS production was the allowable influence of Artaud. Artaud wished to create a poetry for the senses using complex physical poetry, music, dance, mimicry, mime, gesture, voice inflexion, architecture, lighting and décor. I wanted to embrace some of this style as it seemed appropriate to telling a story , in particular with two themes I wanted to tease out of the original; those of incest and sadism.

Artaud, at large, wanted theatre to embrace the darker side of our innermost desires and feelings, and these two themes are certainly dark. But I haven’t imposed them. In the original story, Usher mentions ‘inbreeding’, together with the fact that he and his sister have been ‘bound’ to the House for years. Where might their natural sexual urges be focussed then? On each other- certainly a possibility, and one I wanted to explore in this version. The second theme – sadism – I have allowed Usher to have as a trait, more than Madeleine, his sister. The climax of the story centres around Usher having heard his sister’s screams from inside her coffin for some days. Why on earth would he not let her out? One possibility is the sheer horror of the situation- a horror he cannot face but this choice only allows us to experience that at the same point in the story as Usher himself explains it. More interesting to me – if we sow the seeds of his occasional torment of his sister, is that this element in some way simply appeals to him… like trapping a fly in a glass and seeing how long it will survive. So- we have a motif of three bath scenes which allow the audience to see brother and sister at their most intimate, and most secret moments. And it’s not all pretty! Neither is the sister, Madeline, entirely innocent, nor merely a victim of her brother. It’s a pact, an agreement…it’s mutually consensual.

It’s not naturalistic… you may even see Brechtian touches; montage, split screen, simple imagery that continually (and paradoxically) attempts to create atmosphere and tell the story in the most emotionally charged way while at the same time clearly telling you it’s ‘theatrical’. It’s not ‘real’.

Hopefully- at least to some degree, the combined efforts of actors, composer, words, movement, choreography and thematic content, will indeed take you on a journey told using techniques of ‘ghost story’, emotional connection and heightened presentation. 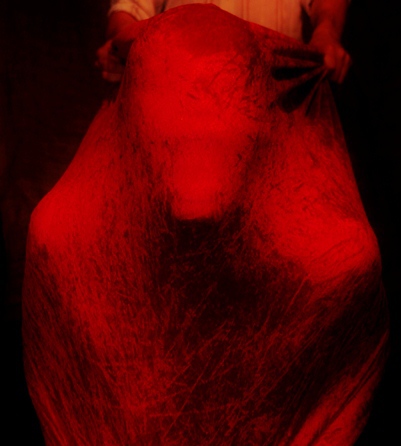