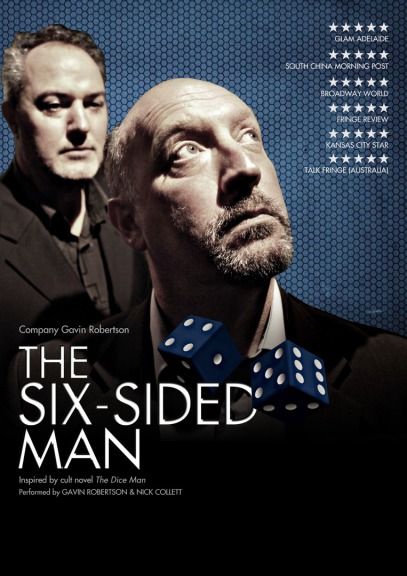 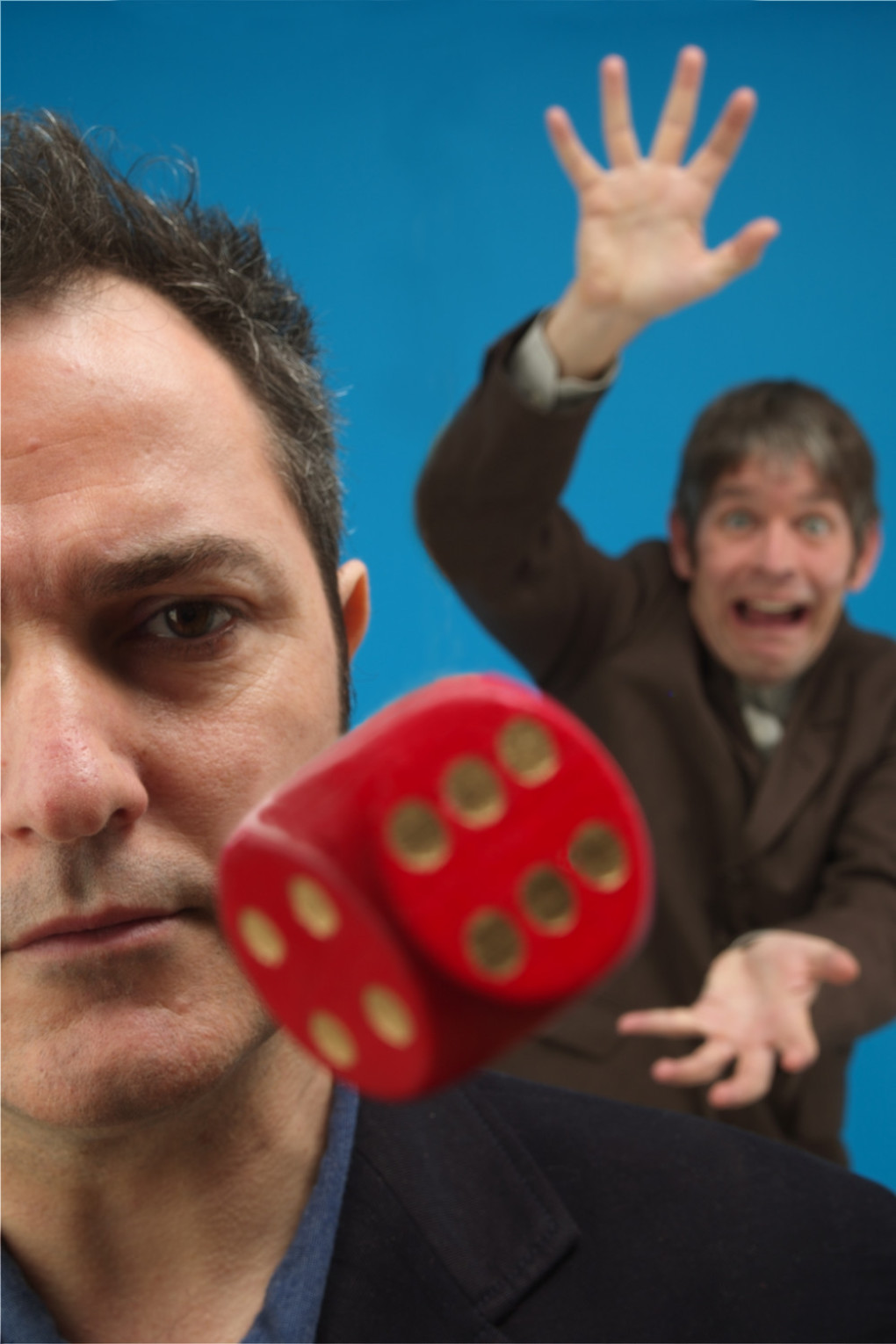 with Andrew Dawson (back)

This has been quite a journey! Initially the follow-up to 'THUNDERBIRDS F.A.B.' Andrew Dawson and I toured this show in 1986 after I was dazzled by the novel, 'The Dice Man' by Luke Rhinehart. As MTP we took this to the Edinburgh Festival in 1987 and thereafter with the British Council to Hong Kong, Costa Rica, Israel, and Memphis in the USA. It duly took its place in the archives after being somewhat interrupted by the success of 'THUNDERBIRDS F.A.B.' in 1989 in the West End.

However - I always wanted to re-visit it and so as CoGR in 2001, I did - again co-opting Andrew to tour with me. I re-wrote parts of the script and it was intriguing to look at this original show after a fifteen year gap. I also went to upstate New York to meet 'Luke', the author of the novel and get his blessing which just felt like the right thing to do! The timing was interesting: Neal Foster at The Birmingham Stage Company premiered 'The Dice House' the same year, and in 2002 I invited 'Luke' to the Brighton Festival to talk about 'the dice life' and his 1971 novel. We spent a day preparing the topics we would cover, then thirty minutes before the show went up he decided we should do the whole thing on spec. I agreed, drank about a gallon of white wine and we went on. It was brilliant! We could have sold out the Dome in Brighton five times over and had people come to the show from all over. One woman flew from NY to see him! Anyway …

The play tells the story of a Psychiatrist who decides to live his life strictly according to the dictates of the dice, to which he gives options. Of course, as time goes by the options become ever more daring until he finally commits murder. I wrote the script as a two-hander set in the Psychiatrist's office, so the audience never really knew by the end if the events were real or if the two characters in the office were role-playing.

On the morals of 'the dice' there is a speech: "If God can see a sparrow fall to the ground, surely he can see the dice fall to the table? Therefore by obeying the dice, we obey God. The Dice are God." I loved this twisted logic, but we were concerned about the reaction it would get in Israel. They loved it. More of an incident was performing with Andrew after he lost a contact lens and went blind in one eye, and being hit by the theatre technician's false leg after it fell off while he was up a ladder. He was called Jacob - think about it…

More recently I produced newer performances - this time with Nicholas Collett ('Spitfire Solo') as 'The Psychiatrist'  while I swapped roles to play 'The Patient'. UK dates followed as well as Edinburgh in 2010, and Adelaide Festival in 2011 (to rave reviews!) The show now exists in repertory, but in 2016 visited Kansas City and Florida in the USA as well as another run at The Assembly Rooms in the Edinburgh Fringe.

"Novel and intriguing - a seductive package" The Guardian

"…the capacity audience were held spellbound throughout the entire performance - witty and unique." Hong Kong Standard

"Simply wonderful...Robertson and Collett are a powerful pair onstage"

"This is riveting theatre, it doesn't come much better"

"Gavin Robertson and Nicholas Collett's theatrical bond is something to behold"

This show continues to delight audiences. Its quirky premise, enigmatic style and unique debate make it a show we're still proud to tour...

“There are two rules: Never give the dice an option you’re not prepared to follow, and never disobey the die! Darkly hilarious, seductive… from Luke Rhinehart’s cult novel, The Dice Man.”

The Six-Sided Man is first class theatre and not to be missed! Two excellent actors draw the audience into the world of chance and recklessness in this seventy-minute dramatic play, inspired by a cult novel The Dice Men.

On an all black set, Gavin Robertson & Nick Collett throw dice, in silent unison. They circle, with eyes piercing through each other. Conversations follow, with narrations directly to the audience, taut dialogue and fine physical theatre. It’s all very intriguing and powerful.

Nick Collett plays a psychiatrist; he’s solid, smart and describes examples of his work. Gavin Robertson who unwittingly becomes part of the game of chance himself plays a patient. During his travels one of the characters discovered the Six-Sided Man. It refers to a strategy to let the throw of dice decide on the basic things in life. While this may be an acceptable (and freeing) thing to do for some decisions, what would happen if you chose to make more important decisions in this way? Could you choose some of those decisions and not follow through with others. If so, what are the consequences?

Collett and Robertson take turns interacting in scenes that are either spoken or silent with brilliant physical theatre and masterful monologues. Each actor is very compelling; they are both personable, with resonant voices, well-defined physical acting skills and a dramatic acting range.

Effective flashes of humour throughout the play emerge organically. The psychiatrist draws his patient out by helping him become aware of what he wants and needs out of life. Suspending his disbelief Robertson has expert timing when he reacts emotionally and so realistically as his somewhat naïve character. He is an instinctive actor evidenced by how he fills in quiet reactive moments with a flinch of the mouth or a swift sideways glance. Collett’s character charmingly develops complicity with the audience, which is fascinating.

This story is perfect for Collett and Robertson’s style of performance: creative, and physical with fine acting. Vocal nuances from both actors are outstanding, with comedic and dramatic timing.

Among the several other characters in the play, the radio interview is a highlight, it is clever and Robertson produces an expert smooth talking radio interviewer voice. Collett transitions to explosive raw emotion in a subtle visceral and intelligent performance.

Company Gavin Robertson productions always have a fascinating music score that heightens and complements the mood superbly and this one is no exception. A richly evocative variety of music enhances the experience and storytelling in this enthralling play.

The mantra of the day is ‘never disobey the die’. It’s finely acted, engrossing, intense and entertaining. Don’t miss it!

"You just know that you’re in expert hands when, to the exact beat of ABBA’s The Name of the Game, the dice are twice shaken and then thrown. Except they’re not, you just believe that you heard the rattle and saw the throw  …. and reckoned the fateful consequence. This is artful, practised, theatre.

The Dice Man appeared in 1971 and became a cult classic. The Six-Sided Man is its stage face, written and adapted by Gavin Robertson and first performed at the Edinburgh Festival in 1987. It’s back (by popular demand?) with Robertson himself playing The Patient and Nicholas Collett as The Psychiatrist. If they could, they’d be spokes on a roulette wheel; as it is they circle around each other, betting each other’s life on the throw of the dice, or die, which is an unfortunate pun.

The reason being, you see, is that the dice are liberating, freeing you of restraint and conformity by determining a single course of action that is irreversible. ‘Should I go out of the window four storeys up?’ becomes, on the throw of a 3, ‘I must go out of the window’. And where there is mortal risk there has to be sweet reward: roll a 6 and it’s the other guy who goes head first. The Winner Takes It All.

But that’s to jump the gun (with just the single bullet in the chamber, of course). The Patient comes to the Psychiatrist with his problems. The doctor is brisk. “Show me”, he says and the rest might be such weird stuff as dreams are made on but you’re not too sure. In fact – if that’s not too loaded an entity – there’s nothing quite so substantially awful as dog poo on your shoe on a first date.

The cure is that the predictable need not be endured or suffered  Yet the dialogue, alongside the high quality of the mime, voice and movement sequences, is unemotional and wary. No great shakes, you might say, but then you realise that there’s a face off here, with neither character prepared to raise the stakes until he’s as certain as he can be that he has the stronger hand. Knowing Me, Knowing You plays on.

The Dice Man was published under the name of Luke Rhinehart. In August 2012 ‘he’ announced his own death. Some believed it, some didn’t. It was a spoof but it allowed Luke to write his own valediction: ‘If you’re comfortable in the selves you’re rolling along with’, he wrote, ‘then roll on. Most people aren’t.’

You’ll roll with The Six-Sided Man and love its deadpan humour and admire the whole 4* performance of edge and ease but you’ll wonder where it’s going; at which point you’ll feel distinctly uncomfortable. Take A Chance on Me? You bet".

The next performances are in the UK in May 2017