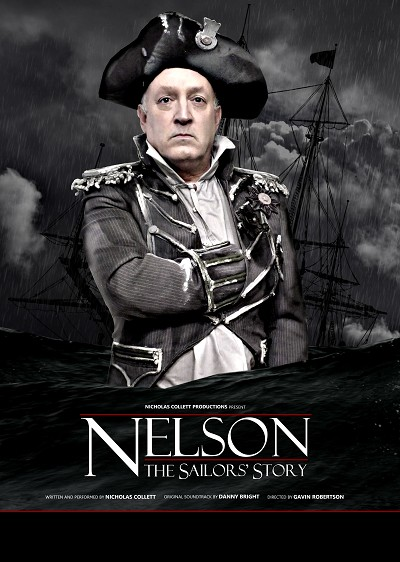 "This is a master-class in how to write, direct, and perform a one man show. Collett's riveting performance and superb characterisations take you back to the mid-18th Century in a way that only the immediacy of live theatre can".

"Nelson: The Sailors' Story is a well-researched, cleverly woven tale told by diverse and convincing characters, all ingeniously played by Collett who delivers an energetic and compelling performance. The spectrum of emotions I felt for Collett's characters, who deliver some poignant messages revealing some modern truisms, are testament to his considerable writing and acting talents."

"Going in, I knew little about British war hero Horatio Nelson, chronicled here in Nelson: A Sailor's Story. But the audience's ignorance seems to be one of the points of this humorous and affecting solo piece. The 18th-century admiral, a statue in London's Trafalgar Square, comes to life and begins his story, brushing away pigeons and watching the goings-on of people beneath his gaze in present-day London. This hourlong play engages on many levels, thanks to a fine script and the excellent Nicholas Collett, who not only enacts the central character but also portrays multiple roles - in action scenes on a warship (including squirm-worthy rudimentary surgery) and in the reflections and thoughts on Nelson's life. I'll never view a historical statue - or the average recruit - in quite the same way".